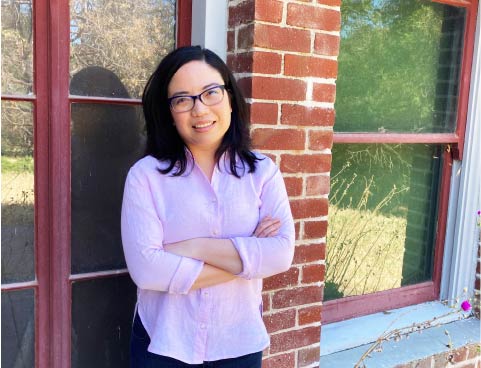 When you think of our country’s National Parks, you might picture the towering rock walls of Yosemite, the snow-covered peaks of Glacier or the prickly cacti of Big Bend. You may have even admired the rustic charm of the visitor’s center and gift shop. But have you ever stopped to think about who manages the amenities at these parks, repairs the bridges and access roads, or more specifically, installs the cave lights in Oregon Caves National Monument?

“I never would have had this opportunity to learn about things like bat hibernation or what range of light color temperatures discourages algae growth in any other job,” says Beatrice Eleazar ’06, ’08, an architect for the Pacific West regional office of the National Parks Service. Her job has taken her across the west coast to remote corners of the nation to enhance our parks and to preserve some of the most spectacular natural features and wildlife in the United States.

A Houston native, Beatrice enrolled at Rice as an engineering major, but soon after observing her friends in the School of Architecture, decided to switch majors and pursue a Bachelor of Architecture degree.

"One of my favorite classes was about the architecture of Houston taught by Stephen Fox,” Beatrice remembers. “We got to do walking tours of the city, and having grown up in Houston, I really had my eyes opened. I had never thought of the buildings in this new way."

After graduation, Beatrice landed in the Bay Area, working at a variety of firms on projects ranging from high-rise commercial buildings to hospitals and fire stations. When she saw the job posting for the National Parks Service position, she was sold. Now, she works on designing cabins, rehabilitating historic buildings, and, of course, lighting bat caves.

Her favorite project so far has been building a single-family dwelling in North Cascades National Park, a remote park in the northern part of Washington state. To get to the project site, she had to take two flights, drive an hour and take a two-hour ferry ride — and that’s just for human transport. “Because building materials are going to have to be transported by barge on the same lake that we traveled across by ferry, we have to think carefully about the logistics,” Beatrice explains. Solving site-specific challenges in difficult terrain is just another part of the job — an aspect that is very different from the urban buildings she once designed.

Since Beatrice started working for the National Parks Service, she has had new opportunities to travel and see amazing parts of the country. At the same time, she has also re-discovered the wonders in her California backyard, including the homes of John Muir and Eugene O’Neill, which are both designated as National Historic sites. Most of all, she is constantly able to satisfy her curiosity: “I get to work with experts in their fields who are so passionate about what they do. With every project, I learn something new.”