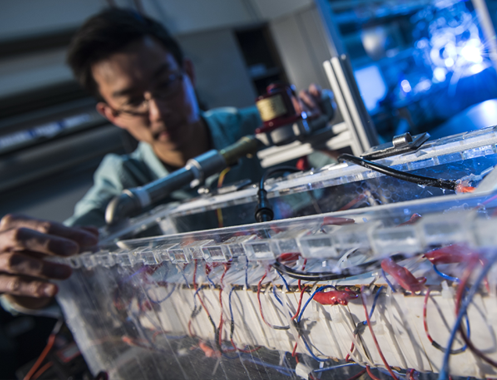 Students studying space science at Rice are busy shaping how we will interact with space in the future. Take a step inside the world of tomorrow and find out what three future space innovators are up to. Rae Holcomb ’19 (general physics major) and Colin Howman ’19 (chemical engineering major) will be externing at NASA’s Jet Propulsion Laboratory (JPL) in January 2017 as part of the Owl Edge Externship program where they’ll spend time shadowing Kristjan Stone ’08.

Space epiphany: What, during your studies, have you learned that has really excited you? The single most exciting moment during my studies at Rice was the day that we derived matrix operations that can be used to solve optical systems in the Physics 201: Waves and Optics class. Call me a nerd, but physics is amazingly elegant!

Space dreams: Fifty years from now, where will we be? Inhabiting Mars? Gosh, I hope so! I am also excited for further exploration of the outer planets (aren't we way overdue for a submarine Europa mission?) I would love to see orbiters around every planet, landers on the major moons of Jupiter and Saturn and probes designed to dive deep into the atmospheres of the gas giants. More than anything, I hope we continue to advance our technology for investigating exoplanets. I believe it is vital that we improve our spectroscopy techniques so that we can detect surface features and chemical compositions of more exoplanets, and someday be able to detect the signatures of extraterrestrial life.

Oh, and one more dream of mine: due to the thick atmosphere and low gravity, it is theoretically possible for humans in wing suits to fly on Saturn's moon Titan. Forget the Space Elevator, this is what I want for the future of space tourism!

Setting the story straight: Is there an element of sci-fi pop culture that gets it right? A movie, TV show, book? I am a huge fan of books that use the science to drive their fiction, whether it's the harrowing survival tale of Mark Watney in “The Martian” using every available material to synthesize the resources he needs to survive on Mars, or the plot-driving focus on reaction mass in the inter-lunar ballistics of Robert Heinlein's “The Moon is a Harsh Mistress.” (You have to love a book that answers the age old question: how hard would it be to build a cannon that shoots things to the moon?) However, nothing quite captures the vast bizarreness of the universe for me better than Douglas Adams' classic “The Hitchhiker's Guide to the Galaxy.”

Space epiphany: What, during your studies, have you learned that has really excited you? While my STEM classes haven’t really catered to anything specifically space related, my membership with Rice Eclipse (Rice’s rocketry club) has taught me a lot about rockets and how they work. I especially love working with rocket fuels and rocket ignition systems. Working with others to build a propulsion system is truly amazing.

Space dreams: Fifty years from now, where will we be? Inhabiting Mars? I can’t see into the future, but it’s my sincerest hope that humanity reaches into far off places beyond Earth. I believe it is a noble scientific goal that could push the boundaries of human knowledge and technology.

Setting the story straight: Is there an element of sci-fi pop culture that gets it right? A movie, TV show, book? There’s always some element to sci-fi that “gets it right.” Sci-fi is different from fantasy or other forms of fiction because it stimulates the imagination while keeping some small part of truth that makes the reader or watcher think “what if it were true?” and “could we achieve this?” Once upon a time, breaking through the atmosphere of the Earth was science fiction, a big “what if,” and now we’ve placed a man on the moon. Perhaps that is the one element that connects all sci-fi stories: delving into scientific exploration, whether it’s space or not, always yields an amazing adventure.

Colin George ’20, who received his bachelor’s degree in aerospace engineering from Texas A&M University, is currently a graduate student in Rice’s space studies program. He’s also working at NASA's Johnson Space Center in the CRONUS group as an operations engineer.

Space epiphany: What, during your studies, have you learned that has really excited you? One of the most exciting moments for me at Rice was personally meeting the Deputy Administrator of NASA, Dava Newman, with other students from the Professional Masters in Space Studies Program. During our hour-long discussion at the Brochstein Pavilion, I was able to find out so much about what is going on at NASA, and the future plans related to missions like the James Webb Telescope, NASA's Journey to Mars, the Commercial Crew Program and many more.

Setting the story straight: Is there an element of sci-fi pop culture that gets it right? A movie, TV show, book? The piece that I think comes closest to the truth in its portrayal of space science is the book “The Martian” by Andy Weir.